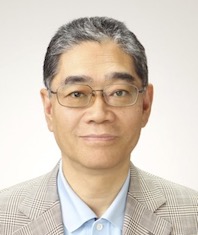 I am Masahiro Goto of Kyushu University, and I took over the presidency of The Society of Sea Water Science, Japan from the previous president, Prof. Kaminoyama. I look forward to working with you.

The Society of Sea Water Science, Japan is a traditional academic society that was established in 1965 by expanding the scope of its activities from The Japan Salt Society, which was founded in 1950. Our society is composed of the "Resource Science", which deals with seawater as a resource, the "Environmental Science", which deals with the relationship between seawater and the global environment, and the "Life Science", which deals with the relationship between seawater and life activities. This broad view of seawater, from resources to life sciences, is unique to our society in Japan and not found in other societies in Europe, the U.S., or Asia, and I would like to devote myself to the further development and revitalization of this society, keeping this philosophy in mind. I have set forth four specific aspirations for this purpose, as follows.

More than a year has passed since the outbreak of COVID-19, and instead of subsiding, the corona virus is increasingly raging around the world. As a result, conference activities have changed dramatically over the past year. The biggest change is undoubtedly the proliferation of online meetings. Nowadays, everyone is familiar with online software. In this context, the 72nd Annual Meeting was also held online, and thanks to the efforts of the organizing committee, it was a certain success. However, I believe that the most enjoyable part of the conference is the annual meeting where all the members gather together to discuss. I believe that it is an important role of the society to spend a close and intimate time with you face to face. I hope that the upcoming 73rd Annual Meeting will be held in Osaka.

2. Enhancement of the Journal and Development of SSST

Thanks to the efforts of the editorial board members, the journal of the Society has become a very attractive publication. In particular, Salt and Seawater Science & Technology (SSST), which was newly published as a journal last year, has seen an increase in the number of accesses to original papers thanks to the Open Access system on J-STAGE. In the future, we would like to clarify the division of roles between these two journals and further enhance each of them. In the journal, many excellent review articles have been introduced so far. In particular, the monthly ranking of the number of accesses shows that many of the top articles are reviews on food science. This function as a review journal is one of the most important features of our journal, and we believe it is important to continue to publish review articles on attractive themes. On the other hand, I think the main goal of SSST as a new journal will be to obtain IF status in the future.

Many people tend to think of academic societies as gatherings of mainly academics (university researchers), but many corporate researchers are currently participating in our activities. This is one of the main features of our society. It is important to value the idea of industry-academia collaboration and to further revitalize it. In the past, the number of presentations from companies at the annual meeting has been limited, but we would like to make further efforts to make the meeting a conference that many company researchers would be happy to attend. If possible, I would like to establish an industrial division committee to develop activities that are beneficial to both academia and corporate members.

4. Revitalization of the Young Researchers' Association and Training of Next Generation Talent

The Young Scientists Society, which was established at the 2001 Annual Meeting in Fukuoka, has become a great asset for our society. Recently, the Young Scientists Society has been holding research presentations every year, and its activities are becoming more and more active. With the retirement of the baby boomers, the number of members of all societies has been decreasing, and there is an urgent need to nurture the next generation of young people. Our society also wants to devote its budget to the development of young people and focus on fostering human resources for the next generation. On the other hand, we also believe that it is important to utilize the senior generation who have retired from their regular jobs. I think it would be a good idea for them to leave their valuable knowledge and experience to the next generation by using our magazine.

I look forward to working with all of you for the development of our society, and I ask for your strong support.