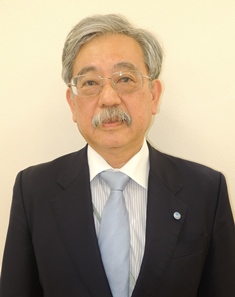 In early June this year, not long after the era changed from Heisei to Reiwa, the chairmanship of the Society of Sea Water Science, Japan, was passed to me by Dr. Kyoichi Saito, Emeritus Professor of Chiba University.

The sea has given birth to life, and has nurtured and fostered it. From salt, to marine products, marine resources, submarine minerals and marine energy, the sea has given us myriad benefits. The sea also sometimes shows us its attractiveness in a multitude of variations. I was fascinated by the vivid appearance of the silver-white Great King Squid that I recently watched on an NHK documentary program. It's large, glaring eye still does not leave my mind. I also cannot forget the graceful dance of the mysterious ancient fishes which thrive in the deeps of the sea. It is thought that life was born near the hydrothermal vents on the seabed. Ample natural resources, such as rare metals and methane hydrate, also give us dreams and encouragement. You should not hesitate to make efforts to crystallize and reveal the unknown and unused blessings that quietly sleep in the sea and the seawater. There are also several research groups in the society with that very purpose as their goal.

However, a one-sided enjoyment of the blessings from the sea and seawater is unfair, isn't it? Recently, plastic pollution of the ocean is becoming more and more serious. We are overwhelmed with shame by the fact that a large amount of plastic waste was removed from the stomach of a blue whale that washed ashore on the Kamakura coast on August 5, last year. Micro plastics make the problems even more serious. The Society alone may not be able to find solutions, but it is impossible to reach a point that we can turn our eyes away from those problems.

We are delighted to see some hints of solutions, such as the regeneration of mangroves and the development of biodegradable plastics in the seawater. New efforts are also being made to move the government to subsidize and actively promote the processing of the marine plastic of fishing nets.

The story may require a leap in technology, but if the power of the typhoons on the sea can be successfully abated or applied, it may help reduce natural disaster damage and help solve the energy problem. If we can control the temperature distribution of the ocean, we may be able to relieve the occurrence of abnormal weather by suppressing La Niña and El Niño.

First of all, must we only to listen to the voice of the sea in vain? Returning back to the sea may be presumptuous, but we would like to respond to that voice by combining the older generation's mature wisdom and experience, with the flexible ideas and bold power of the younger members of this society. I do hope that everyone in our association will be returned by this approach, as well.

Welcome to the Day of the Sea, on July 15